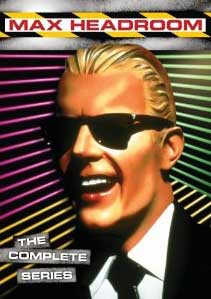 Max Headroom was a fictional, computer-generated TV host created in the 1980's and portrayed by actor Matt Frewer.  The computer-generated head and shoulders appearance of Max was created through prosthetic makeup and hand-drawn back drops.  The character first appeared in a 1985 made-for-tv movie titled Max Headrom: 20 Minutes into the Future.  The Max Headroom character was such a success, that he ended up with his own show, called the Max Talking Headroom Show, where he played the role of a music video veejay.  The popularity of Max continued with the British made, US aired TV series titled Max Headroom (lasted 2 seasons).  After the return of Coca-Cola classic, Max was made the commercial spokesman for New Coke, his catchphrase being "Ca-ca-ca-ca-ca-catch the wave".  Max even had his own video game in 1986.  By the late 1980's, Max was all but deleted (little play on the computer-generated idea).  His last known cameo at the time of this writing was in the 2015 movie titled Pixels.