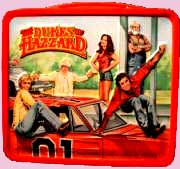 The metal lunch box was nothing new by the time the 80's rolled around.  Lithographed metal had been used to produce colorful lunchboxes since the Hopalong Cassidy lunch box was created by Aladdin Industries in 1950.  But like previous decades, the lunch box of the 1970's and 1980's was typically related to some TV show, movie, band, or arcade game.  With matching thermos, some 80's examples included lunch boxes for shows like the A-Team, Knight Rider, the Dukes of Hazzard, Thundercats, and the Fall Guy.  There were lunch boxes for movies like Star Wars, E.T., the Gremlins, and even Rambo (ironic given that it was rated R).  The most common band related lunch box was for the band Kiss, and arcade game examples included themes like Pac-Man, Q-Bert, Dragon's Lair, and so many more.

Although the plastic lunch box had been created well before the 80's, it really didn't start showing up until the 1990's.  At the time of this writing in late 2015, metal lunch boxes, and in many cases plastic ones too, were a pretty rare (although new ones were still being made).  It would seem that kids opted for fabric lunch bags instead.