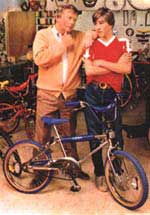 Bicycle Motocross (BMX) began in the early 1970's, after bicycle enthusiasts in California took to motocross tracks on their bicycles to do stunts and to race against each other.  In 1972, a racing documentary titled "Any Given Sunday" aired on television, and it is credited as introducing the rest of the USA to the new sport.  By 1975, BMX was a hot commodity, and bike manufacturers followed suit with customizable BMX bikes and accessories.  In April of 1981, the International BMX Federation was founded, and the first world BMX championship was held the following year.  Australia even released a full-feature movie in 1983, titled BMX Bandits, that starred a young Nicole Kidman.  Before long, every kid in our neighborhood had their bikes decked out with safety pads and were jumping curbs and home-made ramps.  The popularity of BMX seemed to climax in 1987, but it never really went away, illustrated by the fact that in 2008,  it became a full medal Olympic sport.