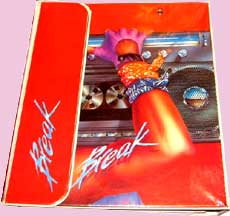 The Trapper Keeper (made by Mead) was a loose-leaf binder, usually with some sort of colorful design or theme, that was popular in the USA and Canada throughout the 1980's.  They were named "trapper keepers" because of the three-ring pocket folders that came with them.  These folders were called "Trappers", and were basically designed with one extra glued edge than the normal folder (think pocket), which kept the papers "trapped" inside.  You would close your Trapper Keeper using a velcro latch, which meant that after so many open cycles, the velcro wore out (and so was the Trapper Keeper wouldn't close any more).  Although the popularity of the Trapper Keeper peaked by the time the mid 1990's rolled around, Mead continued producing them.  At the time of this writing, in late 2015, Mead was back at it, this time with Star Wars and Hello Kitty themed binders and accessories.