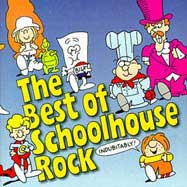 Back when Saturday morning meant sitting in front of the TV and watching Pac-Man, Scooby Doo, and Superfriends on ABC, kids were given the opportunity to learn through short videos like School House Rock!  These 3 minute shows ran from 1973 to 1985 and covered topics around grammar, history, math, science, and economics.  The series was revived in 1993.  Initially, there was a total of 37 episodes produced.  The first episode that aired in 1973 was titled "My Hero, Zero", which was a math video about the powers of 10.  Some of the more memorable episodes, at least those that we remembered after looking over the list, were "Conjunction Junction" (about conjunctions), "I'm Just a Bill" (about how a bill becomes a law), "Electricity, E-Lec-Tri-City" (about how electricty works), "Interplanet Janet" (about the solar system), "The Great American Melting Pot" (about diversity), "The Shot Heard Round the World" (American Revolutionary War), and "The Body Machine" (about the digestive system).