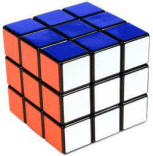 The Rubik's Cube (Magic Cube) was a 3-D puzzle created by Erno Rubik in 1974 and sold to the Ideal Toy Corporation in 1980.  The Rubik's Cube was one of the best-selling toys worldwide.  At the time of this writing, there was still a number of speedcubing contests taking place around the world.  The quickest time for solving the puzzle, at the time of this writing, was held by Colin Burns (USA), who solved the puzzle in 5.25 seconds.  Although not as popular, there were a number of other Rubik's puzzles created, such as the Rubik's Snake, Rubik's Domino, Rubik's Revenge, and the Rubik's Triamid.