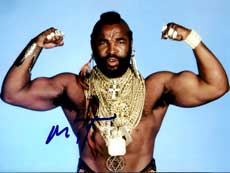 "First name 'M', middle name 'dot', last name 'T'".  Mr. T (born Lawrence Tureaud) was an American actor best known for his role as the tough B.A. Baracus in the hit TV show the A-Team.  His tough-guy persona carried over to the big screen as well, where he appeared as Clubber Lang in Rocky III (1982).  Throughout the 1980's, Mr. T was widely recognized as the body builder with the mohawk and gold chains around his neck.  After leaving the US Army, Mr. T became a bouncer at a night club, and it was there that he began the habit of wearing the jewelry that bar patrons had left after a fight or by mistake.  It is said that he had been in over 200 fights as a bouncer, evidenced by the fact that he was sued many times, but never lost.  After being a bouncer, Mr. T became a body guard, and was so well respected, that he charged $3000 per day (minimum) and protected well-known people like Steve McQueen, Michael Jackson, Diana Ross, and Muhammad Ali.  So the tough-guy persona was not an act.  Mr. T was the real deal.

In 1980, Sylvester Stallone noticed Mr. T on the NBC show America's Toughest Bouncer, and thus began his acting career as Clubber Lang in Rocky III (his catchphrase, "I pity the fool", came from this movie).  Mr. T became such a hit in the 80's, he even had his own cartoon and cereal!  Other noteworthy Mr. T 80's happenings:  He was Hulk Hogan's wrestling partner in 1985 on WWF; After the cancelation of the A-Team, Mr. T starred in the shows T. and T., which ran from 1987 to 1990; He released an album in 1984 titled T's Commandments, which was essentially an instructional video to teach kids to stay away from drugs and to stay in school.

At the time of this writing in late 2015, Mr. T was still very active, having agreed to star in a home improvement show called I Pity the Tool".  It is worth noting that in 2005, after hurricane Katrina, Mr. T gave up most of his gold, stating:  "As a Christian, when I saw other people lose their lives and lose their land and property...I felt that it would be a sin before God for me to continue wearing my gold. I felt it would be insensitive and disrespectful to the people who lost everything, so I stopped wearing my gold."