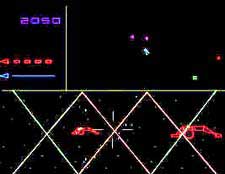 Star Trek: Strategic Operations Simulator was a vector space combat simulator, released by Sega in 1983, based on the movie and television series Star Trek.  There was a sit-down and standup version of this game.  In the game, the player must battle the invading Klingons while continuing replenishing the Starship Enterprise’s shields at various star bases.  Controls for the game made use of a spinner that controlled the ships heading, and buttons for impulse, warp speed, phasers, and photon torpedoes.  The game made use of the recorded voices of characters from the show, and the screen was divided into three sections:  a supplies readout section that showed shield strength, weapons left, and warp power, the upper right section showed a map of the star system, and the main screen was the action.

Star Trek was developed for a number of home console systems, such as the Atari 2600, ColecoVision, Apple II, Atari 5200, Commodore 64, and a number of others.