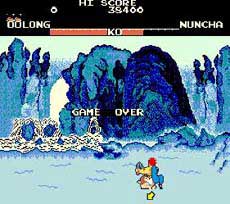 Yie Ar Kung-Fu was released by Konami in 1985.  The name means “one, two, Kung-Fu”.  In this game, the player assumes the role of Oolong, who must fight a number of martial arts masters in order to become “Grand Master”.  Like other games of the time, the player had a joystick and a number of buttons, the combinations of which could produce different attack moves (up to 16 different moves).  There were 11 masters to fight to become the Grand Master, each with his or her own unique fighting style.  The masters had names like Buchu (a big Sumu wrestler), Star (a young female), Feedle (a replicating master), and Blues (the last and hardest master to beat).

Yie Ar Kung-Fu was developed for a number of home consoles, such as the NES.  For those of you who played the NES version, you will remember that the protagonist’s name was Lee, and there were only 5 masters to compete against (Wang, Tao, Chen, Lang, and Wu/Mu).  The arcade version was released in later years, for contemporary systems like the Xbox, PlayStation, Gameboy, etc., as part of the Microsoft’s Game Room, Konami Classic Series Arcade Hits, and the Konami GB Collection.