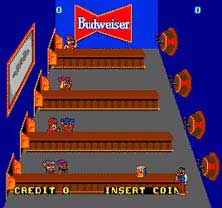 Tapper was a Bally Midway game released in 1983.  The game started out as Tapper in 1983, with a bartender serving up Budweiser Beer, but considering that most of the games were featured in the mall arcade, Root Beer Tapper soon became the de-facto replacement.  The Budweiser version did remain in bars.  In a nutshell, the premise of Tapper was to serve the patrons drinks before they got tired of waiting.  Each stage featured four bars, and the bartender had to move from bar to bar, sliding drinks down to the patrons before they made it to the tap themselves, at which time the player would lose a life.  The player would also lose a life if any glasses were dropped to the ground.  The idea was to serve the drink quick enough to force the patron off the screen.

As the levels progressed, gameplay became more difficult as more patrons showed up, some of which would simply stop paying attention when a beer was headed in their direction.  Once all the patrons were cleared from the screen, the player would advance to the next level.  Some of you will remember the bonus level, where a masked bandit would shake all the cans but one, mix them up, and the player would have to guess which one was still flat. 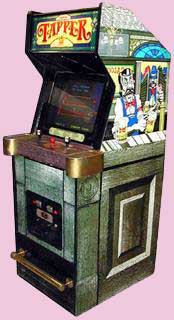 A few of you may remember the game Domino Man, also released by Bally Midway in 1983.  These two games have similar “roots” (get it?).  There was also a version of this game in the arcade called Soda Pop Tapper (1984).  Root Beer Tapper was released to a number of old vintage home consoles, like the Atari 2600, ColecoVision, and the Commodore 64.  In later years, it could be found on Midway Arcade Treasures, Xbox Live Arcade, and Midway Arcade Origins for the Xbox, PlayStation, GameCube, and Wii.