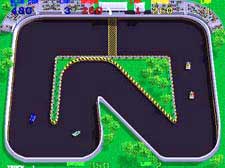 Super Sprint, released in 1986 by Atari, was like the Formula 1 version of the game Off Road.  Viewed from the top down, three players could race at once, and after three laps, the winner advanced.  There were 8 circuits and 85 total races.  As the player advanced, gameplay became increasingly more difficult with the introduction of obstacles like tornados, oil slicks, and a handful of others.  Wrenches could be picked up during a race and then traded in for upgrades to the car, such as better traction, higher top speed, or faster acceleration.  If the car is destroyed, by running into the wall or driving over the edge, a helicopter would fly in and drop off a new car. 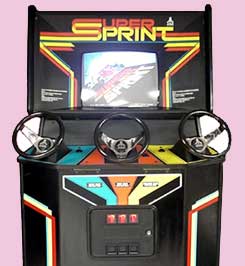 Some of you may remember the arcade sequel to Super Sprint, also released in 1986, called Championship Sprint. It featured different tracks and a two-player cabinet.  Super Sprint was released a few home consoles back in the day, such as the Commodore 74 and the NES, and later for the PlayStation, Gameboy, GameCube, and Xbox as part of the Midway Arcade Treasures and Midway Arcade Origins compilations.