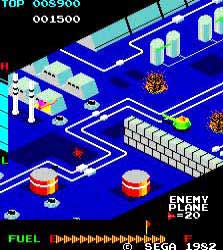 Zaxxon was an arcade game released by Sega in 1982, and the first to be advertised for on television.  We remember the game being very difficult to play, although the 3D isometric projection (from a third person perspective) was very cool.  In this game, the player had to fly a ship through a fortress, blowing up targets and avoiding obstacles.  As the ship would move forward, the player had to adjust the craft’s altitude, using the ship’s shadow and an altitude meter, to squeeze through tight places.

Zaxxon was not only popular enough to warrant a sequel ( Super Zaxxon was released in 1982), but also a Milton Bradley board game (1982).  It was also one of the view games to make it into mini-arcade table top production. 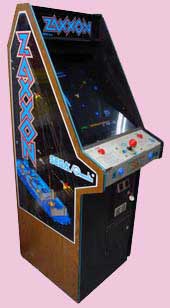 Zaxxon was developed for just about every home console available, including the Atari 2600.  We would waste tons of hours playing Zaxxon on the Atari 2600.  The ColecoVision version was the only one to maintain the third person perspective.  Other versions and sequels were created, and there were tons of knock-offs.  In 2006, Zaxxon was re-released on the Sega Genesis Collection for the PlayStation and later as part of the Wii Virtual Console.