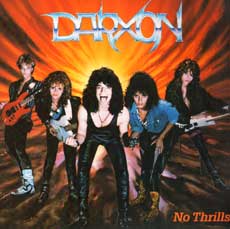 Darxon was a metal band from Germany that formed in 1983.  They released their first album, Killed in Action, in 1984 on the Wishbone Records label.  It was a pretty raw album without little frills.  Their second release, No Thrills (1987), was a bit more polished with better production quality than its predecessor (and it was released on a different label).

Darxon is another one of those metal bands that few people were aware of back in the day, but that deserves a new look by old school metal fans.   Vocalist Massimo DeMatteis has a knack for heavy metal, and there was nothing pop metal or AOR about their music.  If you are looking for something old school that is new to you, then you will like Darxon.

The Darxon Discography is as follows: