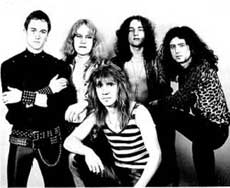 Persian Risk was a British metal band that formed in the late 1970's in Cardiff, Wales.  In the early 80's, they received some attention when a few of their singles ended up on metal compilations, such as Heavy Metal Heroes Vol.2 (1982).  The songs were "Calling for You" and "50,000 Stallions".  After a number of demo releases that started in 1979, Persian Risk finally released their first full album, titled Rise Up, in 1986.

By the time Rise Up was released, Persian Risk was done.  In 2012, vocalist Carl Sentance announced he would be releasing new material under the Persian Risk moniker, but will all new bandmates.  The musical style of the newer stuff is still clearly heavy metal, but certainly different than the metal they were playing in the 1980's.  At the time of this writing, the Persian Risk Discography was as follows: