Listen for free or download any Ratt track for just 12 cents per song! 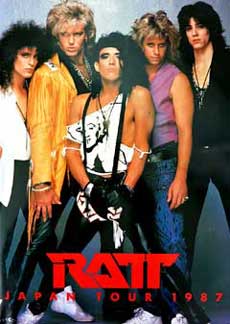 In 1976, Stephen Pearcy formed a band called Mickey Ratt in San Diego.  The band did produce some under this name, and many well known rockers graced it's membership (such as Jake E. Lee).  By 1981, the band had moved to Los Angeles and shortened the name of the band to simply "Ratt" and began looking for a major record deal.  It wasn't long before many of the original band members, including Jake E. Lee, left to form the band Rough Cutt.  After a few additional transitions, the classic Ratt member line up that we are familiar with was solidified:  Pearcy on vocals, Warren DeMartini on guitar, Bobby Blotzer on drums, Robbin Crosby on guitar, and Juan Croucier on drums.

In 1983, Ratt had landed a record deal on a minor label and they released their self-titled debut.  The success of this initial effort landed the band a major record deal with Atlantic Records and the subsequent release of Out of the Cellar in 1984.  Many of you will remember the hit songs "Round and Round" and "Wanted Man" from this album.  MTV also helped the band explode by giving Ratt videos heavy rotation.  In support of this album, Ratt toured with bands like Ozzy Osbourne, Billy Squier, Blackfoot, Lita Ford, Motley Crue, Iron Maiden, and and Twisted Sister.  Another interesting fact about Ratt is that Crosby's high school girlfriend, Tawny Kitaen, was featured in some Ratt videos and album cover art.  Tawny later became David Coverdale's (Whitesnake) gal and was featured on the video "Here I Go Again".

In 1985, the band released Invasion of Your Privacy, which charted at number 7 (like their 1984 release) and brought us songs like "Your'e In Love" and "Lay It Down".  The band continued to pump out the hits. Dancing Undercover (1986) included the songs "Dance" and "Slip of the Lip", whileReach for the Sky (1988) brought us songs like "Way Cool Jr." and "I Want a Woman".  The bands 1990 release, Detonator, included the songs "Shame Shame Shame" and "Lovin' You's a Diry Job".  Some critics complained at the time that Ratt was all over the board with their music style, from bordering on thrash metal to teetering on pop metal.  In our opinion, this is what makes Ratt's music what it is:  Variety.

In 1991, Crosby's drug use forced the band to cut him lose, and he was quickly replaced by Michael Schenker (MSG) for a time.  In 1992, Pearcy left the band to form the short lived band Arcade.   Shortly after, the remaining band members went on to other projects.  By 1996, Ratt had reunited with some original members (including Pearcy) and some new members.  They released a new self-titled album in 1999.  Needless to say, as the years went on, there were additional break ups, reunions, mega metal tours (Rocklahoma, Shiprocked), and new material.  In 2002, Crosby died of a Heroin overdose.  In 2010, Ratt came back together and released a new album, Infestation, which charted at number 30 on the Billboard Top 200.

At the time of this writing, the Ratt Discography was as follows:

Listen for free or download any Ratt track for just 12 cents per song! 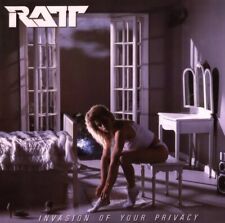 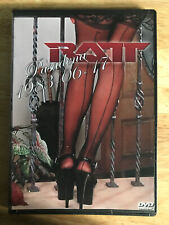 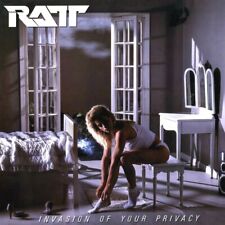