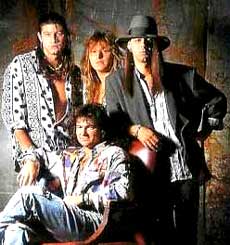 Roko was a late 80’s melodic, metal band from Germany founded by Robert Kohlmeyer.  The band released their first album (self-titled) in 1990 on Polydor Records.  Some of you may remember the song “One Night Stand” from this release (and subsequent video).  Their second release, Open Invitation, was also released on Polydor.  There final two albums, released in the 1990’s, were produced on the RK Records label.

We know very little else about the band.  We can tell you their first 2 releases are very solid melodic productions.  The vocals are very good and we could not find anything to complain about (they were much better than some bands that survived longer).  Roko’s 1994 and 1996 releases are very different from their first two albums (much less metal and more “rockfish”).  The Roko Discography is as follows: