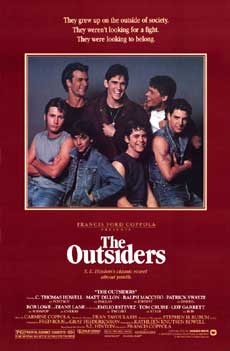 "They grew up on the outside of society.  They weren't looking for a fight.  They were looking to belong".  The Outsiders, a Francis Ford Coppola film released in 1983 and based on a novel by S.E. Hinton, had quite the cast:  Ralph Macchio as Johnny Cade, C. Thomas Howell as Ponyboy Curtis, Emilio Estevez as Keith “Two-Bit” Curtis, Patrick Swayze as Darrel Curtis, Rob Lowe as Sodapop Curtis, Matt Dillon as Dallas Winston, and Tom Cruise as Steve Randle.  This movie is basically about friendships, loyalty, and different classes of people in the Tulsa, OK hood of the 1960’s.  The film received mostly positive reviews and was a financial success.

This movie features the clashes between to social groups in 1965 Tulsa, Oklahoma.  On the poor side of town, you had the Greasers, which included members Ponyboy Curtis (Howell), his brothers Sodapop (Lowe) and Darrel (Swayze), Johnny Cade (Macchio), Dallas Winston (Dillon), Two-Bit (Estevez), and Steve Randle (Cruise).  On the wealthy side of town, you had the Socs (pronounced “soashes”), which included members like Bob Sheldon (played by Lief Garrett) and Randy Adderson (played by Darren Dalton).  When 5 Socs jump Ponyboy and cut him with a knife.  In a later confrontation, the Socs hold Ponyboy’s head under a fountain, and to save his friend, Johnny pulls out a knife and kills one of the Socs.

After the confrontation, Ponyboy and Johnny leave town and hide out in an abandoned church.  After the they go out for food with Dallas, they find the church on fire upon their return, set ablaze by some young children who were fooling around.  After they rescue the kids, Dallas and Ponyboy recover from the injuries quickly, but Johnny is more seriously hurt.  When Johnny dies, Dallas goes on a rampage, robbing a store with an unloaded gun, with the purpose of suicide by police, which indeed comes to fruition.  In the end, Ponyboy is returned to his brothers, and life goes on for the gangs of Tulsa. 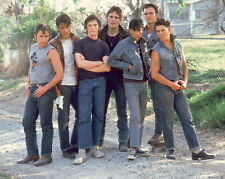 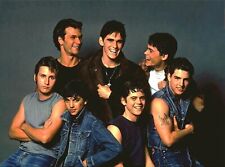 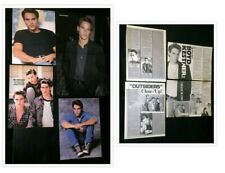 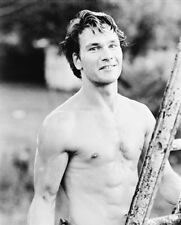