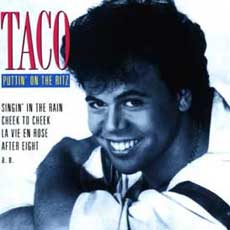 Taco Ockerse, born in Jakarta, Indonesia, spent his childhood moving from country to country.  Taco showed an interest in the arts at an early age, eventually going to school for interior design and acting.  By 1975, he was acting professionally on stage and by 1979, he had started his first band (called Taco's Bizz).

In 1981, Taco landed a record deal with Polydor in Germany.  His first release single, "Puttin' on the Ritz", was by far his most successful  (released on the album After Eight).  This international hit was his only top 40 Billboard hit in the 1980's.  Because it was so popular, we had to include a page to Taco.  And we really like tacos.  His second 80's release, Let's Face the Music (1984), was a moderate success in Europe, but not in the USA.

As the years went on, Taco focused his music on a German audience, while also concentrating on his acting career on German TV.  Taco was known to be active well into the 2010's.  The Taco Discography is as follows: