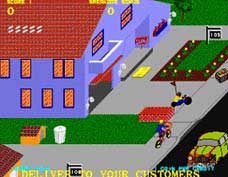 Paperboy, released by Atari in 1984, was not only unique, but also very difficult to play.  The entire premise of the game was to deliver papers to the appropriate subscribers while riding your bicycle along your newspaper route.  Controls were a bicycle handles and a button to toss papers.  The paperboy maintained subscribers by successfully delivering the newspapers without damaging their homes, and racked up points by vandalizing non-subscribers homes.  The whole while, the Paperboy had to avoid obstacles such as the neighborhood bully, break dancers, swarming bees, cats, speeding cars, storm drains, drunks, remote control cars, the grim reaper, and a host of other obstacles.  At the start of the game, the player could choose from three different difficulty levels.  At the end of each level, there was a training course, which the player could traverse for bonus points.

Versions of Paperboy were created for a number of later consoles, like the NES, Gameboy, and Sega Genesis.  The original version was also released on Midway Arcade Treasures for the GameCube, Wii, PlayStation, IPhone, and Xbox.