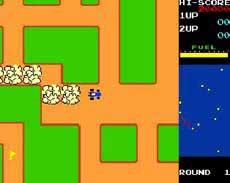 Rally-X was created by Namco in 1980 and released by Midway in the USA.  Rally-X became one of the most popular games to come out of the 1980’s.  We always found it rather difficult to play.  The object of the game was relatively straightforward.  The idea was to race through a maze of streets, collect all the flags, avoid Kamikaze enemy racers, avoid boulders, and do it all before the fuel ran out.  Once all the flags are collected, the player would move to the next round.  In order to help the player locate the flags and avoid enemy racers, a small radar display helps out (boulders did not show up on the radar).  As the levels increased, so did the number of flags to collect and the number of enemy cars.  In order to avoid cars, the player had a limited number of smoke screens they could use at each level, which would stop an enemy car temporarily.  After a certain number of levels were cleared, the player moved into a challenging stage, where the player collects as many flags as possible while the Kamikaze cars remain temporarily stationary. 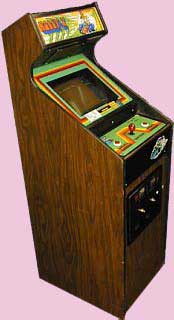 There was a sequel of the game released in 1981 called New Rally-X.  New Rally-X was essentially the same game, but toned down slightly to be easier to play.  One notable feature of the sequel was the bonus flag that would refuel the racer when found.  Rally-X was included in later years on the Jakks Pacific TV Game unit, as well as on the Namco Museum and Namco Classic Collection compilations for the PlayStation and Wii.