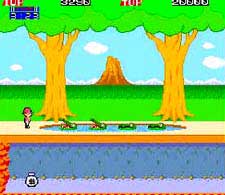 The original Pitfall was released on home versions like the Atari 2600 well before this 1985 Sega version was released.  The popularity of the original game was high enough for Sega to release a sequel to the arcade, so Pitfall II was born.  Like the original game, the player controlled Pitfall Harry, who searches for lost treasure in a maze of jungles and caves (gold bars, silver bars, bags of cash, and diamond rings).  Along the way, he must avoid obstacles such as alligators, logs, snakes, scorpions, falling rocks, electric eels, and fire.  He uses vines to Tarzan his way over bogs and tar pits, and learns to delicately use alligators as stepping stones across infested water holes.

Pitfall, Pitfall 2, and a variety of other versions were released for home consoles.  The Atari 2600 version of Pitfall was certainly a hit at our house, and it was a game you could play forever (and we would since we couldn’t save our high scores).