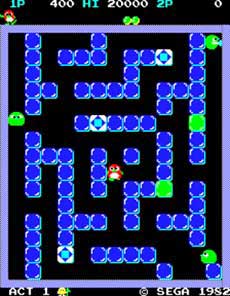 Pengo was released by Sega in 1982.  It was a popular game, and versions of it made it to the Atari 2600/5200, Commodore 64, and Sega Game Gear.  In this game, the player controlled a little red penguin, named Pengo, who had to work through an ice-block maze to defeat the Sno-Bees and earning diamond bonuses.  Pengo would push an ice-block around until it crushed a Sno-Bee, and the more Sno-Bees crushed per move, the more points the player received.

There were a total of 16 levels, and the game stages would repeast at level 17.  Like Ms. Pac-Man, the game would display 6 different intermissions after even-numbered rounds.  The Sno-Bees would respawn from eggs within the ice-blocks, thus the ice-blocks could be destroyed to eliminate the eggs.  Aligning diamond ice-blocks in a particular way would both temporarily stun the Sno-Bees as well as earn bonus points for the player.  If all Sno-Bees remained after 60 seconds, the speed of the game would increase dramatically until either the player lost a life or all Sno-Bees were eliminated.