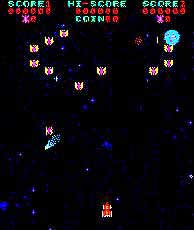 Phoenix was a 1980 arcade game release by Centuri in the USA and Taito in Japan.  Gameplay was similar to Space Invaders and Galaxian, in that the player controlled a spaceship, from the bottom of the screen, which had to shoot upwards towards enemies.  Instead of little aliens, however, the enemies in Phoenix were more bird like.  Like Galaxian, some of the birds would occasionally dive bomb the ship in an attempt to blow it up.  In addition to the laser weapon, the ship was equipped with shields that could be used against dive bombing enemies (the shield took 5 seconds to regenerate).

There were multiple stages in the game, including two stages where the aliens started out as eggs that would hatch into birds that had to be shot in the chest to eliminate (their wings would regenerate if shot).  In the final stage, which was one of the biggest differences between Phoenix and Galaxian, the player had to battle a mother ship boss. 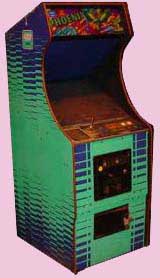 A few of you out in there may remember the sequel to this game, called Pleiades, which was released by Centuri in 1981.  There was another arcade game called Son of Phoenix, released in 1985, that was not related to either of these.  Phoenix was created for home consoles like the Atari 2600, and in later days as part of the Taito Legends compilation for the Xbox and PlayStation.