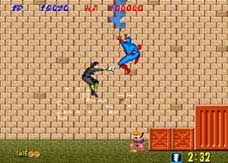 Shinobi was an arcade game released in 1987 by Sega.  In this game, the player assumed the role of a ninja named Joe Musashi, who needed to rescue kidnapped ninja students from a group of ruthless terrorists called “Zeed”.  There were five missions, each with 3 or 4 stages.  For example, Mission 1, titled “pursue the terrorists”, was set in a city slum.  The boss at the end of Mission 1 was a huge fireball throwing Samurai called Ken-Oh.  The last mission, Mission 5 (“defeat the behind-the-scene ninja”), was set in a mansion, and the player had to defeat the leader of the Zeed, a masked ninja who is later discovered to be Joe’s father.  To proceed from level to level, all hostages had to be rescued.  There were bonus levels where Joe could earn points by eliminating leaping ninjas with throwing stars.  In addition to kicks and punches, Joe also had ninja magic and a gun at his disposal.

Shinobi was a popular game in 1987, and was developed for home systems like the PC, Commodore 64, and Amiga.  Many of you will remember the NES version of the game, which was a lot of fun to play.  There were some sequels released in home consoles, such as The Revenge of Shinobi.  In later years, Shinobi was available for the Wii, Xbox, and PlayStation.  Some of you may remember the arcade sequel of the game, called Shadow Dancer, which was released in 1989.  The major difference between Shinobi and Shadow Dancer was that the later provided the player with a canine companion, and the goal was to diffuse bombs and eliminate terrorists.