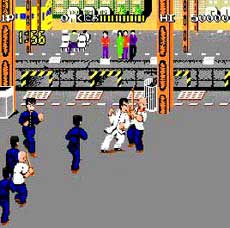 Renegade, one of the earliest beat-em-up arcade games, was released by Taito in 1986, and became the developmental standard for a number of similar games going forward.  In this game, the player controlled a vigilante who had to rescue his girlfriend from a gang of thugs.  Moving around, kicks, and punches were accomplished with a joystick and combination of buttons.  Renegade was not a scrolling game.  Play was restricted to a given screen area, such as a subway, harbor, alley, or parking lot.  Enemies would attack with fists, weapons, and anything else they could find (such as motorcycles).  When only three gang members remained on the screen, their much bigger boss would come on to the screen to fight.  If the boss was defeated, any remaining thugs would run away.  Bosses included a huge woman, a guy with a knife, and the final boss (a guy with gun). 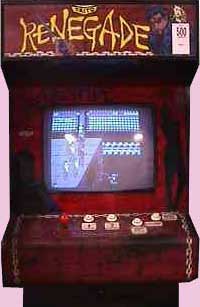 Many of you probably played Renegade on your NES, a version that was different than the arcade in many ways.  Some of you may have even owned the NES sequels to Renegade:  Target: Renegade and Renegade 3: The Final Chapter.