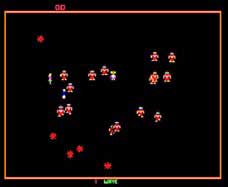 Robotron: 2084, known by most as simply “Robotron”, was a William Electronics game, similar to the game Berzerk, which was released in 1982.  It was a popular game and a big money maker for arcades.  The game is set in the year 2084, in a fictional world where robots have turned against humans, and the player must eliminate these “Robotrons” and rescue survivors.  Gameplay was controlled with two joysticks, one for character movement, and one for weapon direction.  Once all the robots were defeated, the player would move on the next, increasingly difficult, “wave” (level).

Robotron was released on a number of home consoles in the 80’s, such as the Atari 5200 and the Commodore 64.  Although an arcade sequel was never developed, a sequel for the PlayStation and Nintendo 64 was released in 1996 (called Robotron X).  The original game was included later on arcade compilations like Williams Arcade’s Greatest Hits, Midway’s Greatest Arcade Hits, Midway Arcade Treasurers, and Midway Arcade Origins for systems like Xbox, PlayStation, and the Wii.