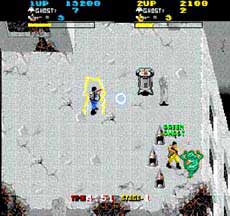 The Real Ghostbusters was the first and only arcade version of the Ghostbusters movie franchise. It was based off of the cartoon TV series of the same name. Released by Data East, up to three players could control members of the Ghostbusters squad at once. Because each character was only differentiated by the color of their clothing, it was impossible to tell them apart.

The game had 10 levels where the players would use their energy guns to fight off hordes of ghastly creatures and reduce them to harmless little ghosts. As harmless ghosts, they could be captured in proton packs. There were a number of power-ups available that would increase the power of the energy shots, create a force field, or even summon Slimer to help block enemy attacks.