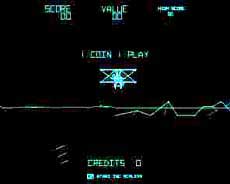 Red Baron, a first person flight simulator released by Atari in 1980, was developed on the same wire-frame, vector graphics platform as Battlezone.  The player is an allied World War I bi-plane fighter pilot, who fights against the Germans and the infamous ace pilot, the Red Baron.  The game was split into a number of levels, with most of them being air combat against a squadron of enemies.  Some levels featured the player battling against ground targets (pillboxes, turrets, buildings) and zeppelins.  One interesting feature of the game was that the difficulty level was controlled by the average time and skill of the last 32 players.  This was done in an effort to keep game time short in arcades where players were really good. 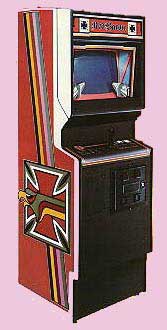 The original Red Baron game was released on the Atari Anthology and Microsoft Game Room compilations for the Xbox, PlayStation, and PC in 2003.  Some of you may have even enjoyed the 1990 PC version of Red Baron, that was released around the same time that other popular games were hitting PC stands, like Wolfenstein and Secret Weapons of the Luftwaffe.