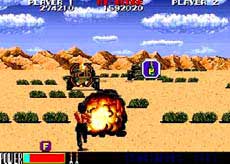 Rambo 3 (Rambo III) was released by Taito in 1989.  Rambo 3 was a rail shooter game that featured Rambo and Colonel Trautman as playable characters.  It was based on the Sylvester Stallone movie of the same name, whereby Rambo went about the business of rescuing Colonel Trautman, who had been taken hostage in Afghanistan while helping defend the Mujahedeen from the Soviet invasion.  From a third-person perspective, Rambo would have to blast through contingents of enemy soldiers using various weapons with crosshairs, as well as fight tank bosses at the end of each level.  It is worth noting that a new Rambo arcade game, simply titled Rambo, was released by Sega in 2008.