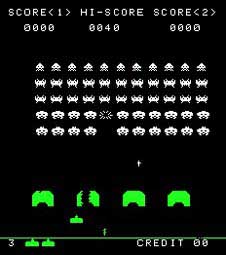 Space Invaders was created by Taito, and released by Midway in the USA (1978).  Space Invaders was one of the most successful games of the late 1970’s and early 1980’s, and continues to be a favorite.  By the end of 1981, it had earned an estimated 1 billion dollars in quarters.  In this game, the player controlled a laser cannon, horizontally at the bottom the screen, which was used to destroy an advancing contingent of aliens.  The aliens advanced one level after each left-to-right pass of the screen, and once they reached the cannon, the game was over.  As more and more of the aliens are destroyed on the screen, the speed of the aliens advancement increases.  Shields could also be used to protect the cannon from alien fire, but after taking a certain number of hits, the shields would disappear.  From time to time, a UFO would cross at the top of the screen, which could be destroyed for bonus points.

Space Invaders was developed and released on a number of home consoles like the Atari 2600, NES, Playstation and many more.  In 1980, Bally Midway released a pinball version of Space Invaders, and many people may remember that Space Invaders Part II hit the scene in 1979 (known as Deluxe Space Invaders in the USA).  Taito Legends, a compilation for systems like the PlayStation, Xbox, and the PC.