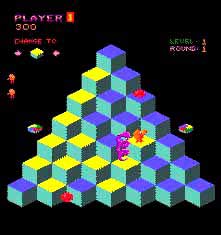 Q-bert (Q*bert) was released by Gottlieb in 1982.  Q-Bert was one of the most popular games to come out of the 1980’s, and in our opinion, one of the most difficult.  The object of the game was simple, and that was to control a character name Q-bert and change the color of every step on an isometric pyramid shaped playing area.  Q-bert would start each round at the top of the pyramid, and begin moving downward diagonally, while avoiding obstacles such as Coily the name, Ugg and Wrong Way, and two gremlins named Slick and Sam.  It was the diagonal movement that made the game the most difficult, as it was easy to jump of the side of the pyramid by accident, in which case Q-bert would lose a life.  Once all the block’s colors were changed, the player moved to the next round.  As levels progressed, the play became more and more difficult as blocks would need to have the color changed multiple times. 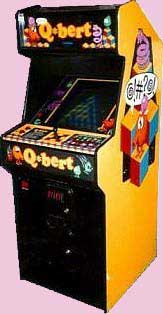 There were arcade spinoffs of Q-bert, but they were rare.  There was Q*berts Qubes, released by Mylstar Electronics in 1983, and a pinball game called Q*bert’s Quest.  As a character in pop culture, Q*bert was very popular.  He had his own Saturday morning cartoon (Saturday Supecade), and could even be found on lunch boxes, t-shirts, board games, and other toys.  Q-bert was developed for tons of home consoles, from Atari 2600 to the Odyssey, and in later years, contemporary versions and remakes were made for the PlayStation, etc.