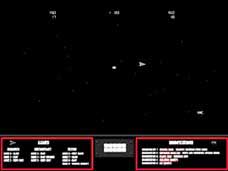 Space Wars was a vector graphics game, like Asteroids and Lunar Lander, released by Cinematronics in 1977.  In this early arcade game, two players each controlled their own ship, in an effort to blast the other to smithereens.  Two players were required, as there was no computer controlled opponent options.  Control of the ship and its weapons was governed by a series of buttons.  There were two buttons to rotate the ship left or right, one for thrust, one for weapons, and another for hyperspace (would make the ship disappear and reappear in another area of the screen).  There were a few gameplay options, such as an option to have a planet in the middle of the playing area with gravitational pull, the option to allow ships to pass from one side of the screen and appear on the opposite side, and even option to close the edges in, like Omega Race, and have shots ricochet off the walls. 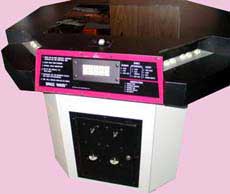 Fans of this game will remember that game time was contingent upon the number of quarters your grandma sent you off with.  Basically, each quarter earned 1.5 minutes of game play, so a roll of quarters would allow to gaming nerds to settle in for one hour.  Some of you may even remember playing Space War on your Atari 2600.