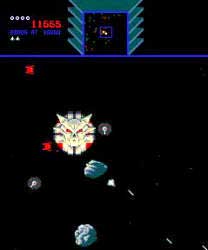 Sinistar was a relatively popular arcade game released by Williams Electronics in 1982.  In the game, the player piloted a little spacecraft that created and gathered “Sinibombs” by blowing up planets and collecting crystal debris.  The Sinibombs were needed to defeat the game boss, Sinistar (it took 13 bombs to blow up Sinistar).  At the same time that the player collects crystals, so does the enemy ships, which uses the crystals to construct Sinistar.  Fans of the game will remember that Sinistar was a skull-faced spacecraft that would say things like “Beware, I live”, “Run, Coward”, “I hunger”, and “I am Sinistar”.  Although Sinistar had no weapons, if he ran into the player’s ship, the ship was destroyed.  After Sinistar was defeated, the player would move to the next zone to battle him again (zones were called Worker Zone, Warrior Zone, Planetoid Zone, etc.). 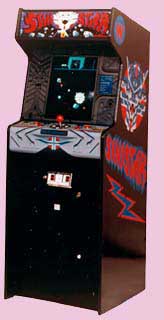 Sinistar was developed for the home console until the 1990’s, at which time it was released on Williams Arcade’s Greatest Hits for systems like Super NES, Sega Genesis, Sega Saturn, Dreamcast, and PlayStation.  In later years, Sinistar was put out on Midway Arcade Treasures for the Xbox, GameCube, and PlayStation.