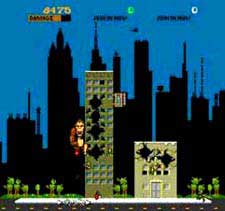 Rampage was an arcade game released by Bally Midway in 1986.  The idea of the game was to destroy a city and survive the military onslaught intent on putting an end to the mayhem.  Up to three players could play simultaneously, taking control of one of three characters:  George (a King Kong like gorilla), Lizzie (a little Godzilla), and Ralph (a big werewolf).  As the story line went, these three characters started out as normal human beings, but after a series of experiments, they would morph into these horrid, destructive creatures.  While going about the business of destroying the buildings, the player would destroy tanks, police cars, eat people.  Players received damage form bullets, tank shells, rockets, and even punches from other monsters.  Once the player’s health was depleted, they would return to human form, and could regenerate with continuous play.  Health could be regained by eating bonus items such as fruit and soldiers, and other bonuses (and obstacles) could be found while breaking out the windows in a high rise.

Rampage was developed for the Atari 2600, Atari 7800, Commodore 64, NES, and a number of other home systems.  In later years, the game was released in its original form for the GameCube, Wii, PlayStation, and Xbox under the Midway Arcade Treasures and Midway Arcade Origins compilations.  In later years, sequels were released on some of these same platforms, such as Rampage World Tour, Rampage 2, and Rampage: Total Destruction.