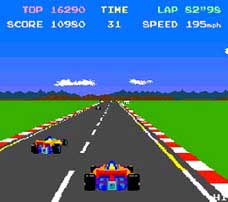 Pole Position was a racing arcade game released by Namco in 1982, and the first to feature a real racing circuit.  The game was released in both a stand up and sit-down version, and ended up being the highest grossing machine of 1983.  Pole Position is often considered the granddaddy of racing games as it spawned an entire new era of increasingly sophisticated racing games.  Fans of the game will remember that the player, driving a Formula One race car, starts the game by completing a trial lap to determine the player’s position in the upcoming race against computer generated drivers (pole position being the front position).  Pole Position II, the sequel released by Namco in 1983, was basically the same as its predecessor, but with better graphics and different race tracks. 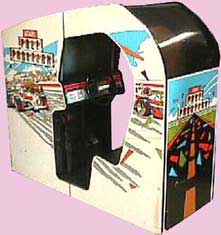 Some of you may remember that Pole Position spawned a short lived Saturday morning cartoon that lasted most of 1984.  It was also developed for a number of home systems, such as the Atari 2600 (we wasted many hours playing it).  Both versions were later developed for contemporary systems like the PC, PlayStation, Xbox, and GameCube on compilations like Namco Museum and Microsoft Return of Arcade. 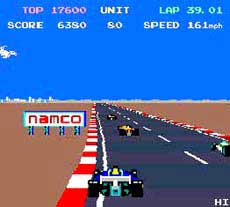