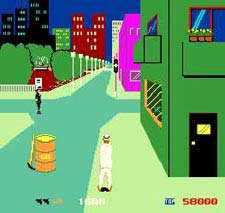 Shootout was a shooting gallery arcade game released by Data East in 1985.  The game was played from a third person perspective, with the player’s character being a guy in a whit suit and hat at the bottom of the screen.  The player basically had to fight the mob without getting shot himself and shooting police officers or citizens.

Using an 8 way joystick and two buttons (fire and jump), the player would start the game in a training area, shooting paper targets.  The player could move left or right only, and the forward joystick directions where used for aiming, and pushing the rear directions for crouching.  Bonus points could be earned by shooting inanimate objects, such as traffic lights and flower pots.  There were a total of seven stages, like an amusement park, hotel casino, and hotel bar.  If the player managed all levels, the game would restart at level 1.